These disaster myths are some of the most prevalent and long-standing that we encounter in our field. While we will always encounter disasters, it seems to be rare where we become fully informed about these disasters. Disaster myths, unfortunately, are then able to widely spread and become hard beliefs of those in our communities. Use the information in this piece to not only inform ourselves but also inform those around us. We seek to improve disaster outcomes across the world.

Myth 1: The wind is the most dangerous part of a hurricane

This is one of the most frequently heard myths here at DisasterDoc. We work extensively in the Caribbean and have learned otherwise. Everyone sees sensationalized footage where the poor weatherperson is standing at a 45-degree angle to combat the hurricane-force winds seen whipping in their faces.

They can throw those poor crews out there because the wind is not the most dangerous part of a hurricane. The danger instead comes from the risk of flooding and storm surges (especially in areas below sea level). This observation is not to say that the strong winds can be ignored. Instead, we’re pointing out why they are usually standing in strong winds compared to strong waters.

Waters can rise significantly from heavy rainfall alone. Also, low-lying and coastal areas can be victim to storm surge, where ocean waves can flow into residential areas. Storm surges can appear suddenly and unexpectedly, catching those in or near the ocean waters off guard.

There is also the risk of debris within the waters. Storm surge and floodwaters often carry enough strength to move heavy debris. This flow can create dangerous currents, making navigating waters almost impossible (as well as the risks associated with debris).

Overall, we need to worry less about wind during hurricanes and more about water– the storm surges and flooding.

Myth 2:We don’t need to follow evacuation orders; our house is safe

Of course, if you have a well-built and even partially weatherized home, chances are you may be safe. This myth does not pertain to specific disaster mitigation attempts by homeowners. We recommend taking those steps and preparing with your community for potential disasters. This myth instead refers to when evacuation orders are in place through government mandate.

Despite the mitigation efforts we may have at home, it is wise to follow any orders to evacuate. Evacuation orders come after a review of potential hazards and the risk of those hazards occurring using tools such as hazard maps.

Ultimately, experts use calculations to determine what areas are most at risk for which hazards. If your home is under a mandatory evacuation order, it is a way for your local government to say, Hey, after this date, ’you’re pretty much on your own

By on [our] own we mean that emergency services will not be rushing out during widespread flooding and destruction to come to save you after the evacuation order. They literally will be unable to navigate a way to save you without directly risking their own lives. We all know responders go above and beyond and put themselves at risk. Nobody, however,  can expect them to sacrifice themselves for someone who decided to stay home instead of leaving town for a few days.

You will be able to replace your belongings. It may take a while due to how much may be insured, but you cannot replace a life once it comes to an end. Please consider your risks, and follow evacuation orders if you are in hazardous zones.

Myth 3: We (as a nation) are much better at preventing disaster deaths now than we were 50 years ago

This disaster myth is one of the most surprising to find out it is not valid. Generally speaking, societies have had a long history of scientific development, testing, and improvements to nearly every sector of our country. Technology is available in-home to help with things people 50 years ago would only think is science fiction. Medicine has allowed us to eliminate certain diseases or create cures for those still sticking around. Why wouldn’t disaster science have the same improvements?

Take a look at the graph below. This graph shows the crude mortality rate of the US in disasters over the last 50 years. We see no statistically significant change in the crude mortality rate for disasters during that time frame. Compared to the profound changes in virtually every other field, we are WAY behind here. (By the way, this graph does not include COVID data, where there were an estimated 169 deaths per 100,000 US population!) 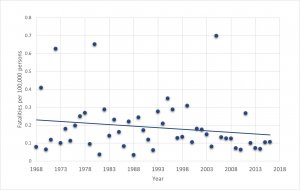 There are ways we can work to improve this. One of these ways is through the formation of a National Disaster Safety Act (NDSA). In short, the NDSA would create an administration, board, and center for statistics that would operate independently of the government. This disaster safety legislation would have each part focus on improving the US crude disaster mortality rate. It would be the first legislation of its kind. Before this, there has been no mandate of any government agency to demonstrate a reduction in the crude disaster mortality rate in the country.

Myth 4: We can’t really do anything to prevent disasters from occurring

No, we cannot turn on a device to stop a hurricane (and no…we can’t nuke it either). We can’t control the weather. However, we can take mindful steps to improve disaster outcomes and combat climate change. Climate-related disasters are on the rise, and as climate change worsens, the incidence will only rise further.

This myth can quickly be dispelled by looking at the definition of the word disaster. According to the UN, a disaster is “a sudden, calamitous event that seriously disrupts the functioning of a community or society and causes human, material, and economic or environmental losses that exceed the community’s ability to cope using its own resources.”One way to help prevent future disasters is to adjust our ability to cope using our resources.

Improving our ability to cope with disasters can be done through any number of steps. You can work on infrastructure in areas more prone to specific hazards to limit the likelihood of infrastructure being a cause of disaster deaths. Infrastructure changes can include city planning to allow better evacuation routes. It can also include our individual efforts to disaster-proof our homes.

Another way we can prevent disasters is through appropriate planning. We have already looked at how the planning process is as important (if not more important) than the physical plan itself. If our communities are making efforts to prepare and approach things ahead of the incident, we can be sure to limit losses beyond our capabilities.

Myth 5: It is possible to outrun a tsunami/tornado

Hate to burst the bubble here, but no, you cannot outrun either a tsunami or tornado. No matter how fast we may try to run, the truth remains that it is just not possible. Whenever you see it in movies or tell you a story of their friend who did so…it is all malarkey.

A tsunami is essentially a wall of water traveling with the force of a bulldozer. It will uproot trees, throw vehicles, and rip homes off foundations. Once hitting land, the water from a tsunami travels around 20-30 mph (32-48 km/h). Unless you are particularly apt at running, a better bet would be to seek to reach higher ground. If a tsunami warning is in place, like we mentioned in Myth #2, don’t stick around for it. Get out and get to higher ground safely away from where the impact is expected.

A tornado travels up to 60 mph (approx. 97 km/h) on the ground. A typical tornado will move slower than 60 mph, but you cannot outrun one regardless of this. A better option would be to seek shelter in a basement or a hurricane shelter. A lower level of a secure building (away from windows) would also be a suitable option. Based on the speeds that tornadoes travel, it is even not recommended to try to outrun a tornado in your car. Always seek shelter away from windows and debris in a central solid (lower level) room.

These disaster myths are just a few more of the things we at DisasterDoc hear on TV, on social media outlets, and even in meetings or work projects. Of course, nobody is at fault for these misconceptions (unless they purposefully share misinformation). The best thing we can all do is learn and inform ourselves of the truth behind disasters and disaster preparedness to better prepare for future emergencies.

Let us know your thoughts on these myths, and let us know if we forgot any!