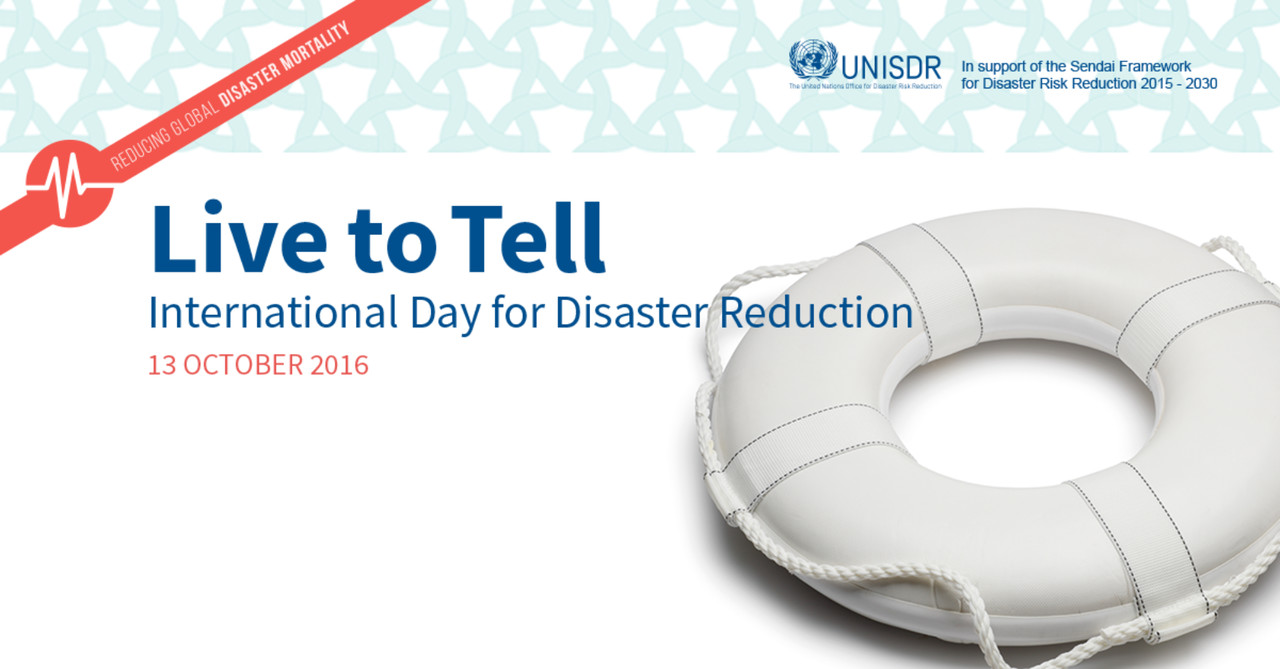 How do people die in disasters and what can be done?

A short paper to support the International Day for Disaster Reduction 2016: “Live to Tell”

During the past 50 years (1966-2015) 20,533 disasters caused an estimated 4.5 million deaths worldwide. Natural hazards caused 62% of these disasters and 38% were human-induced. [1] We are reminded that, sadly, most disasters (and disaster deaths) that could happen have not happened yet. (GAR 2015, p54.)[2] This paper describes disaster mortality and what measures can be taken to reduce the mortality from future hazardous events, including disasters.

Disaster-related mortality is defined as those deaths occurring where the immediate or the underlying cause(s) occur as a result of exposure to a natural or human-induced hazard.

The Sendai Framework recognizes two groups of hazards – natural and human-induced. There are five subtypes of hazards:  three induced by natural hazards (biological, hydro-meteorological, and geological) and two induced by human activity (technological and societal). A disaster might involve a combination of these hazards in that damage to water infrastructure might lead to increased exposure to biological hazards.

The mortality from larger-scale disasters which meet the criteria for inclusion in the EM-DAT international database are reflected in this paper, whereas the mortality from large numbers of smaller-scale hazardous events is not included. High mortality is associated with the most severe events, such as the Asian tsunami in 2004 and the Haiti earthquake in 2010, both of which reported more than 200,000 deaths. Smaller-scale geological and hydrometeorological disasters (i.e. with death tolls of less than 30 people) account for only 14 per cent of total disaster mortality. However, the mortality associated with these events has risen almost fourfold in those countries with consistent data since 1990. (GAR 2015, p93).

Using the science of epidemiology (the study of health risk determinants), one of the ways that the health sector uses to describe risk is the probability that a particular outcome (e.g. disease, injury) will occur following a particular exposure. Exposures to hazards result in adverse health outcomes, including mortality (death). Hazards which release energy (such as cyclones, earthquakes, heatwaves and fires) or toxic substances (such as chemicals) are usually associated with injury while biological hazards cause disease. Other health consequences, which don’t fit so easily into the injury and disease categories should also be considered such as malnutrition, mental health effects, disability and exacerbation of chronic diseases and health system outcomes such as damage to health facilities and disruption to health services which can also lead to increased mortality.

Patterns of disaster-related mortality vary according to hazard. The cause of death from technological and geological hazards is nearly exclusively due to injuries.

Finally, most biological disasters (by definition) are associated with mortality nearly exclusively due to communicable diseases.

It is noted that mortality is rarely from a single cause. The most common contributors to mortality burden in disasters in developing countries are respiratory infections, diarrhea and maternal neonatal conditions. Malaria in tropical zones, tuberculosis in low resource settings and physical trauma in conflict or acute disasters from natural hazards are major causes of death. Further causes of high rates of mortality include outbreaks of measles, meningitis, cholera and yellow fever. Mortality is often compounded by the prevalence of high levels of malnutrition and HIV, especially in low resource settings. Moreover, deaths due to chronic non-communicable diseases where treatment is interrupted are increasingly recognized.

Table 1 illustrates the spectrum of injury and disease associated with five sub-types of hazards.

The development of any life-threatening injury or disease progresses through a natural history that can be broken into a series of stages. Preventive measures can be applied at any stage along the natural history of a disease, with the goal of preventing further progression of the condition.

The time between exposure to the hazard and onset of injury or disease – the “incubation period” – is an important consideration when prioritizing public health activities intended to reduce disaster-related mortality.

The period for developing a life-threatening injury is commonly measured in minutes to hours whereas this period for outbreaks of disease is most commonly measured in days to weeks. This rapid onset of disaster-related injuries markedly limits the effectiveness of secondary and tertiary prevention (e.g. response and recovery interventions). For example, the outcome of traumatic injuries is highly dependent upon the rapid availability of definitive surgical care within one hour from exposure (commonly known as the “golden hour” due to its valuable critical impact on survival outcome). However, the character of most large-scale technological, hydro-meteorological and geophysical disasters frequently precludes accessibility of life saving surgical care for the overwhelming majority of patients. Primary prevention of the injury is therefore of critical importance to reducing mortality risk from these disaster-related hazards.

In outbreaks and societal disasters, there is frequently more time available to allow for an effective intervention before significant disability or death occurs.

Another factor that contributes to elevated mortality is the presence of vulnerable groups in the population. Some factors known to increase the risk of mortality appear to be hazard-specific. Examples include: the association between heat wave deaths and advanced age; tsunami deaths and female gender; under five mortality and complex emergencies; as well as floods and low socioeconomic status.  In addition to these hazard-specific factors, those who are already at highest risk are going to be even more vulnerable during times of displacement and deprivation.

There is a traditional view of the emergency management cycle which identifies four main areas for action – prevention, preparedness, response and recovery. Arguably this is an “event-based model” – aimed at preventing hazardous events from occurring, preparing for these events, responding to them when they occur and recovering from them. The focus of public health in disaster risk management is the reduction of negative health outcomes – in which case two other models offer a way forward: a) an outcome based model where from a public health perspective, one can say that all measures are forms of prevention – that is preventing a worse health outcome (and ultimately death) from occurring; and b) a risk-based model which includes measures to treat risks through avoiding or reducing hazards, vulnerabilities and exposures and build capacities to manage the health consequences.

Public health has a long history of building societal capacity for successfully reducing mortality by: avoiding or reducing hazards: reducing exposures; and lowering vulnerabilities to disease and injury.  Table 2 illustrates the cross-sectoral role of injury and disease prevention as a means for reducing disaster-related mortality.

Table 2 above reveals how closely the means for public health prevention and disaster risk management may be integrated to achieve the mutual goal of reducing disaster mortality. All stages of prevention begin with an assessment of the health risk. These data are collected from routine health surveillance as well as other disaster-specific outreach activities involving enhanced surveillance, needs, hazard characterization, risk analysis and communication.

Capacity is the combination of strengths, attributes and resources that a population may apply to reduce disaster risk. Populations use this collective capacity at each stage of prevention to reduce disaster-related mortality.

Primary prevention (preventing the hazard from occurring or preventing exposures that would lead to injuries of disease). Primary prevention measures include an interdisciplinary approach for identifying, characterizing, monitoring and avoiding hazards. In addition, primary prevention also includes aspects of exposure prediction and modeling as well as structural and nonstructural means for reducing exposures that may include public policy, warning systems and population protection measures. Finally, healthy, well-informed people are better able to avoid hazards and prevent exposures. Vulnerability reduction measures such as health promotion, education and preventive health services help to build and maintain population resilience.

Secondary prevention (preventing injury and disease after exposure occurs). These activities typically involve emergency response activities such as search and rescue, mass casualty response, disease control, and hazardous material response to enable early diagnosis and appropriate management of injury or disease. These complex interventions many times become more complicated by the damage sustained by the disaster event itself. Mortality outcomes during this time are highly time and resource dependent. This results in the defining characteristic of a disaster for public health, namely the mismatch of acute needs that results in excess mortality.

The natural history of disaster-related injuries often limits the effectiveness of secondary and tertiary prevention following disasters from technological, geophysical and hydro-meteorological hazards, emphasizing the importance of primary prevention before the event occurs. On the other hand, the relatively slower onset and often chronic nature of events caused by biological and societal hazards, does allow more time for effective mortality reduction through secondary and tertiary prevention measures during response and recovery. In order to be effective in reducing mortality, health-related actions must be applied during the appropriate window of opportunity. It is important to recognize the value of a comprehensive approach to the prevention for disaster-related mortality.

[1] The data is in this paper is based on the EM-DAT international disaster database managed by the Centre for Research on the Epidemiology of Disasters (CRED), Belgium. In EM-DAT a disaster is recorded when at least one of these criteria is met: 10 or more people reported killed; 100 or more people reported affected; a state of emergency is declared; and/or a call for international assistance. (http://www.emdat.be/)

[3] References for different types of hazards in the WHO International Classification of Diseases and Related Health Problems, Version 10, 2016 (http://apps.who.int/classifications/icd10/browse/2016/en)  include the following:

Societal hazards: As above; Chapter IV:Endocrine, nutritional and metabolic diseases include malnutrition.