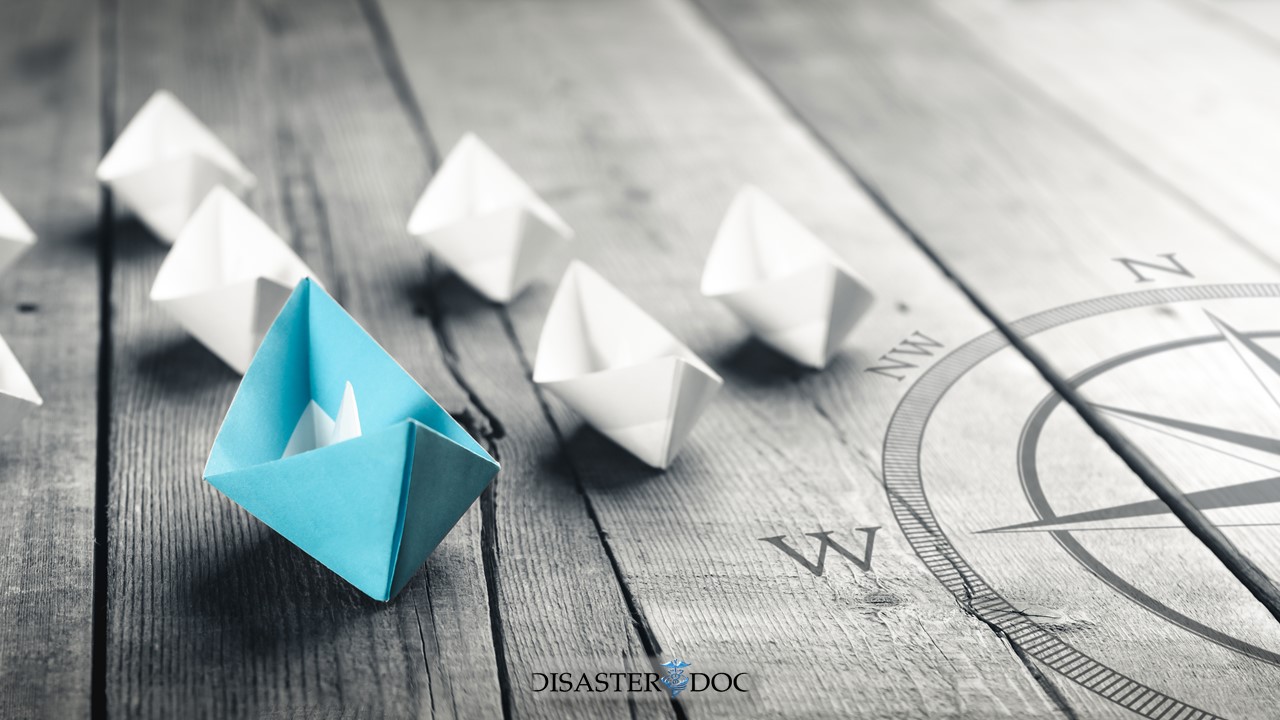 The Need for a National Disaster Safety Act 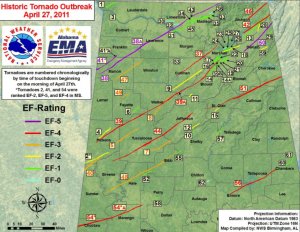 In April 2011, an outbreak of over 360 tornadoes occurred within a three day period in the southern US representing the largest and most costly tornado outbreak in our history. It was also one of the most deadly. I was working as an Associate Director for Science for the CDC Office for Environmental Health Emergencies at the time. And as I arrived at work that morning , I was met by Dr Miguel Cruz, a good friend, and fellow CDC disaster scientist. We both had the same burning question, “What the hell just happened?”

What about the huge environmental disaster that had just occurred made it capable of killing 348 Americans, with 238 of them in Alabama alone? To us, it was like a plane had crashed and we wanted to know why. Over 300 Americans had lost their lives during one tornado event. . This was unheard of. On April 27 alone, the 316 fatalities represented the most tornado related fatalities in the United States in a single day since the tri-state outbreak of 1925. Of course, in 1925, there were no weather forecasts, Doppler radar, modern communications systems, or federal programs designed to lessen their impact. This 2011 event was the costliest tornado outbreak in US history with total damage reaching over $10 billion.

You can imagine our surprise when we arrived at work to discover that CDC had no plans to investigate the outbreak and there were no requests for assistance from the states for such an investigation. In subsequent meetings. we learned that in absence of a state request for assistance, CDC had no mandate, nor interest in funding an epidemiological investigation of the event. To put this in “post-Covid” terms, there was no epi-curve of cases to observe , let alone “tamp down”.

In effect, a rare , large-scale environmental disaster had occurred and the US government had no immediate plans for evaluation of its root cause or contributing factors. The political, administrative and bureaucratic realities were of no surprise to either one of us. However, Americans were still dead without an answer. It was during those meetings at CDC when I first posited the need for a national disaster safety board that would have the mandate to investigate such national tragedies. My logic was that when 300 Americans die in a plane crash disaster, the National Transportation Safety Board would be there the next day to investigate. But this was not the case when 300 Americans died in a natural disaster.

According to a 2019 editorial written by non-governmental public health leaders and published in the American Journal of Public Health, the US government does very little to measure the effectiveness of disaster -related interventions in terms of number of lives saved. During the past 50 years the United States has spent literally billions of dollars in US federal and state allocations and there has been no significant change in US disaster mortality rates.

During the same time, the US passed numerous examples of major disaster–related legislation: 1) the Executive order that created FEMA; 2) The Stafford Act; 3) Nunn-Lugar-Dominici Weapons of Mass Destruction act; 4) Pandemic and All Hazards Preparedness Act I and II; 5) the creation of DHS, ASPR, NDMS, NIMS, etc. Billions of dollars in effort expended over decades with no measurable change in disaster-related deaths! 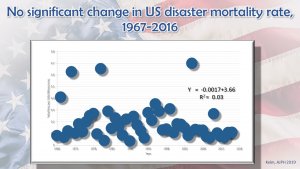 One of the main reasons why disaster response programs have not been effective in reducing disaster –related deaths in the United States is because those deaths occur during the impact phase. What does that mean? It means that most deaths occur when the disaster is still happening – when the wind is still blowing, when the streets are still flooded, when the earth is still shaking… when the fires are still burning. Even our best heroes, with all the best intentions and the most modern equipment simply can’t reach most people during this time. People have used the word resilience to describe how victims can bounce back after a disaster. However, this concept doesn’t work so well when we apply it to health where once you go past a certain threshold, you lose your life. It’s not like a building or a bridge that can be “built back better” And so, what we find when we look at disaster-related deaths, is that most people (around 80%) die within the first hour after being injured. Some of you working in EMS may have heard of the golden hour. This represents the first hour after injury during which victims must arrive in surgery in order to survive. This is difficult to do even on a good day. Let alone during a disaster. For that reason, most disaster victims die on-scene without ever being treated by the medical system. 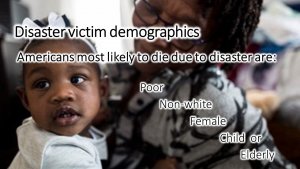 Who is it that dies in a disaster?
We know from years of study that most disaster deaths occur among the poor, and disenfranchised, regardless of nation. The UN has said, “Disasters seek out the poor and bind them in their poverty” Other risk factors include: race, gender, childhood or elderly, co-morbidity and disability. (Doesn’t this also sound like COVID?) Populations that are underserved by society are the first to die in a disaster. They are also the same populations that suffer from health inequity even without a disaster event. 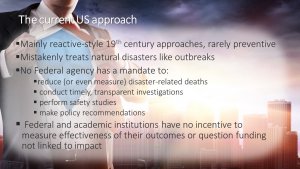 Unfortunately, the US is stalled in a very expensive and poorly effective approach. Our approach is mainly reactive, rather than preventive. We’re stuck in the old 19th-century ways of trying to treat the problem like it’s an outbreak we can manage, instead of preventing one that we can’t. For example, in a disease outbreak, when there are a few cases today, we can send resources to that outbreak and help to “tamp down the curve” However, in the case of other disasters, the curve is over within hours, and we arrive often too little and too late to save most lives. 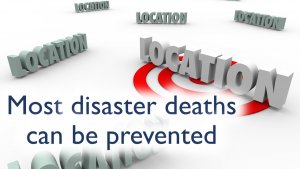 This lack of impact in disaster related mortality is inexcusable because we know that most disaster deaths can be prevented. It’s all a matter of location, location, location. If you’re not in the flood zone, you don’t drown. If the port isn’t storing thousands of tons of sodium nitrate, you don’t explode. If you’re not in the wildfire, you don’t get burned. A lot of what we can do is related to long-term development and short-term evacuations that avoid exposure. 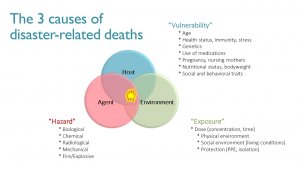 And why do I worry about exposure? It’s one of the three causes of disaster –related deaths, along with the hazard and the vulnerability of the population. It’s when these three things come together that deaths occur. For example, if the hazard (like the explosion in Beirut) doesn’t occur, then people will not be exposed and there is no disaster. In another example, if a hazard (like a tornado) does occur, but people are not exposed to the wind, there is no disaster. So public health prevention basically involves separating the three spheres in this graph. Once separate – no disaster. 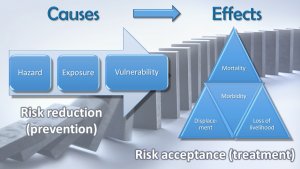 And as I mentioned, disaster risk reduction focuses on the root causes of disaster –related injuries, not necessarily their effects. So, as I mentioned, these causes include hazards, exposures and vulnerability. These studies represent our newest challenges for public health research. Whereas in the past, like emergency management, many of us were focusing on the effects of disasters which include: displacement, loss of livelihood, as well as mortality (i.e. deaths) and morbidity (i.e. illness). The focus has moved from risk acceptance to risk reduction – to the root causes. 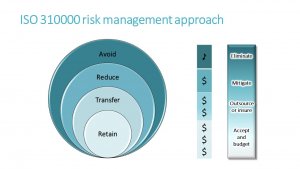 Nations are now addressing this approach through a comprehensive process called risk management, which also represents an international standard (ISO 31000). In risk management, our first choice is to avoid or to eliminate the hazard altogether. This is the cheapest and most effective approach. Our second choice is to reduce the risk and to mitigate its impact. If this is not possible, then we seek to transfer the risk. In other words, share it with others (like mutual aid agreements or insurance policies). And finally, risk that cannot be transferred, is then accepted, and budgeted. This final step represents most of our current US approach to emergency response. 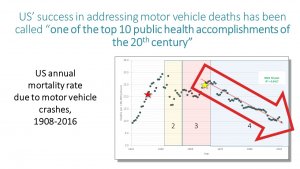 You may ask, how do I know that this is an effective approach? I know because it has the characteristics of other successful public health interventions like the National Traffic and Motor Vehicle Safety act of 1966.

This graph shows the US annual mortality rate due to motor vehicle crashes from 1908 to 2016. You’ll note there are four different sections in the graph, starting with white on the left and then yellow and pink and light blue on the far right. The white section depicts the rising fatality rate starting in 1908 and extending up to a peak at the beginning of World War II. Within this time, a red star denotes the establishment of a National Transportation Safety Board.

In section 2 marked in yellow, we can see a temporary drop in vehicle –related mortality during World War II.
However, this drop is short-lived and again begins a rapid climb in section 3 marked in pink. There, marked as a gold star, is the inception of the National Traffic and Motor Vehicle Safety Act. And following that gold star is a 50 year period of time where motor vehicle deaths have continued to decrease. This has been called one of the top 10 public health accomplishments of the 20th century. And this is why I know that we can make a difference in disaster related mortality. But the most remarkable thing about this graph is that the US mortality rate due to motor vehicles crash injuries has been decreasing over the past 100 years and even more so during the last 50 years.

We CAN do it with a National Disaster Safety Act. 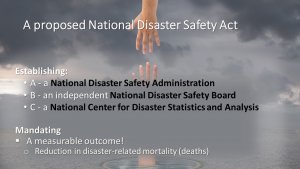 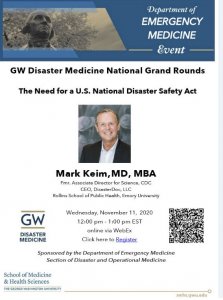 You can learn more on this subject at the George Washington University School of Medicine National Disaster Medicine Grand Rounds, where we expect several hundred attendees from all over the world.

Title: The Need for a National Disaster Safety Act

Please also share your comments below and check out our related blog: “The Difference Between Disaster Safety and Resilience”