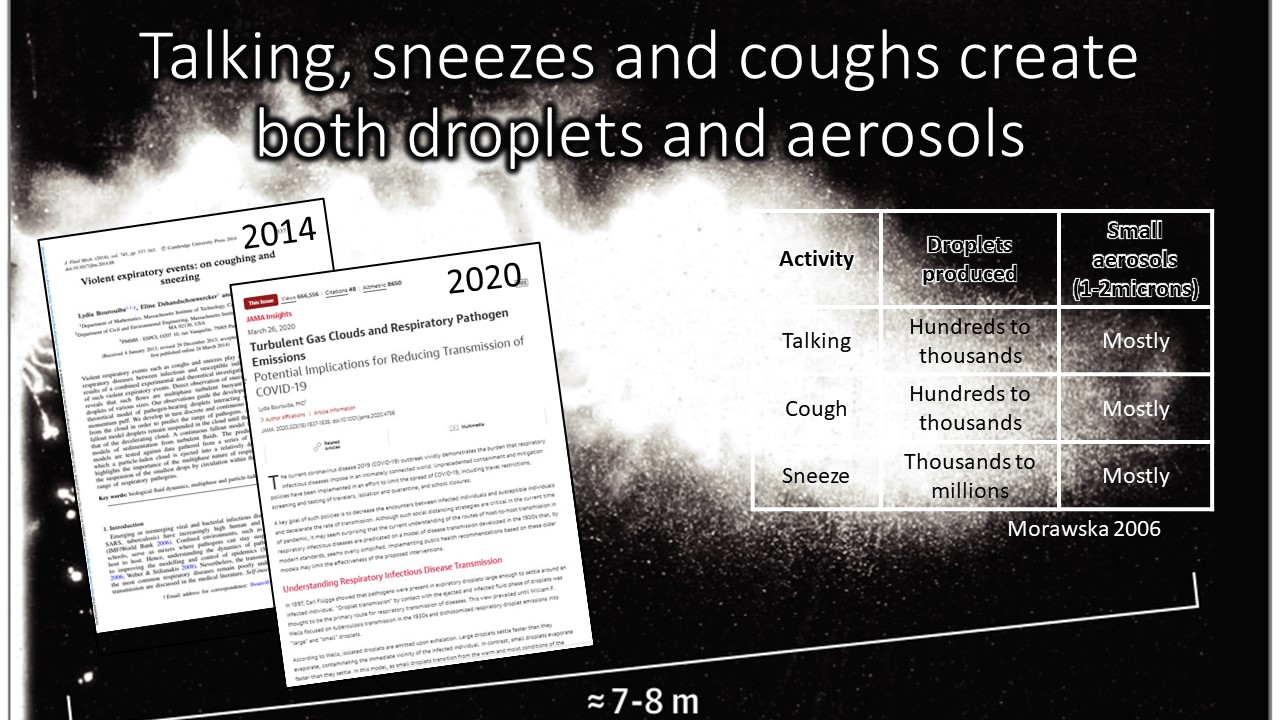 They’ve known all along that COVID19 is spread by aerosol, not merely droplets.

Since June, CDC has reversed itself 3 times during the largest challenge in their 74 year history – COVID19.

Last week CDC abruptly removed guidance about airborne COVID19 transmission and said the update ‘was posted in error’. This was not a coincidence.

Since the beginning, the White House and CDC have downplayed the known science – that COVID19 spread occurs by BOTH droplets and aerosol. Why is that significant?

Because it means that 6 feet is not a safe social distance and face shields are not adequate protection. Safe workplaces may likely require even greater distancing and N95 respirators are likely to be indicated in the workplace, according to OSHA standards.

One of the greatest challenges to ever face US policymakers is how to deal with the complex risks associated with COVID. These risks are difficult because they are not precisely calculable in advance. However, even though there is scientific uncertainty regarding the full extent of the threat, doing nothing is also risky. 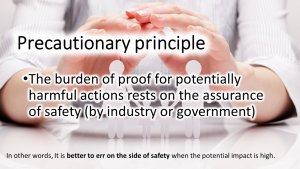 In this situation, decision-makers may use “the precautionary principle”, asserting that the burden of proof for potentially harmful actions (by industry or government) rests on the assurance of safety. When there is risk of serious damage, scientific uncertainty must be resolved in favor of prevention. Simply put, “Better safe, than sorry”.

In the face of high uncertainty, the precautionary principle is considered preferable to alternative approaches based upon “acceptable risk” – the level of human and economic loss that can be tolerated by a society. This is true because the likelihood of harm is higher when knowledge of the risk is low.

It is better to err on the side of safety, than to risk the catastrophic economic and health effects that could threaten an unprotected public.

This “responsibility to protect” the public has been called the fundamental duty of the state. Public servants have a duty of care – an obligation to avoid acts (or omissions), which could be reasonably foreseen to injure of harm other people. This means that public health leaders, must anticipate risks and take care to prevent harm.

It is in service of this duty, that we first learned of the COVID outbreak in January 2020. In February, an outbreak in China was reported to involve an air-conditioned restaurant in which, “Virus transmission in this outbreak cannot be explained by droplet transmission alone.”

By February 19, The Lancet reported asymptomatic cases in China. These implications were clear. It was possible to contract (and possibly spread) COVID19 without symptoms…without coughing or sneezing (i.e. without droplets).

As early as last February 2020, the likelihood of airborne transmission appears to have  already been well established, but our risk-based droplet precautions did not change accordingly. To this day, the US has implemented neither a precautionary, nor a risk-based approach. There appears to be no coherent strategy for respiratory protection of the American public (or is there?).

I’m sorry, but at this point, I have to question as to whether this is an intentional strategy of herd immunity.

According to the precautionary principle, this should have been our wake-up call. It was then that we should have started a massive public health campaign for respiratory protection against aerosols (beginning with essential workers and vulnerable populations, then all workers and the public). Today, we would enjoy the 6-month capacity of focused American industrial might in our favor. Instead, we still face PPE shortages in American hospitals.

While at CDC, I had the opportunity to study bioterrorism and learned the disastrous implications related to airborne transmission. (I published an article about anthrax response two years before letters were mailed and later worked as CDC’s incident commander during the 2001 anthrax emergency).  It was there that I learned of the inaccurate nature of classifying a sneeze or cough as either a “droplets” or “aerosol”. 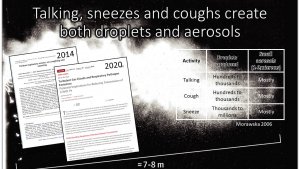 In fact, a wide range of particle sizes are created that have been rather arbitrarily categorized as either aerosols or droplets depending upon whether they are less or greater than 5-10 microns, respectively. In addition, the liquid may also evaporate from larger “droplets” containing a viral nucleus to aerosolize and remain airborne longer). One 2014 MIT study found these aerosols can travel a maximum of 23-27 feet. Of course, we now have evidence that significant amounts of aerosols are created while talking, exercising, and singing.

For this reason, CDC infection control measures have always recommended the use of non-filtering facemasks for droplet-based transmission, and air-filtering (N95) respirators for airborne transmission. These measures have a proven record of effectiveness. In fact, in 2018 one medical journal reported the effectiveness of N95 respirators for blocking respiratory pathogens including influenza and rhinoviruses, as well as the fine particulates present in aerosols.

It is in within this context that the nation’s top public health communicator, the US Surgeon General, sent the following message via Twitter on February 29, 2020:

“Seriously people – STOP BUYING MASKS! They are NOT effective in preventing general public from catching #Coronavirus, but if healthcare providers can’t get them to care for sick patients, it puts them and our communities at risk!”

Let’s be clear, in the face of unheralded uncertainty, during one of the world’s largest global catastrophes, US public health leadership undeniably chose risk over precaution.

And the evidence continues to mount against that fateful decision…

On March 4, JAMA reported that swabs taken from the air exhaust outlets tested positive, suggesting airborne virus. By March 19, WHO recommended the use of N95 (i.e. FFP2 standard) respirators in clinical and community settings.

Out of synch with these findings, on April 3, the Surgeon General demonstrated how to make a facemask from a t-shirt after one study reported their effectiveness in blocking droplets (not airborne aerosols). (T-shirts have since been found to provide “only marginal protection” against COVID19).

But then finally…we heard some good news! On April 24, another study reported that inexpensive respirators with the same level of efficiency as N95 can be easily made from a 3-ply filter using ordinary 600-count cotton and chiffon or silk. 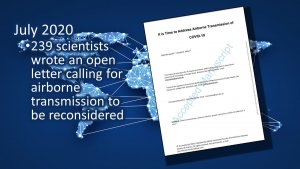 In July, 239 researchers from 32 countries, have urged the World Health Organization and CDC in an open letter to reconsider their misclassification of COVID19 transmission to also include airborne routes of infection.

And yet, there has been no change in the risk-based strategy. Americans continue to wear (and not wear) masks that impart a highly variable degree of protection. For the US public health leadership, this appears to pose an “acceptable risk”.

We should instead treat COVID19 as though it were airborne – until we prove that it is not.

Please share your comments below and see “Indoor gyms: Does the risk to others outweigh my benefit?”