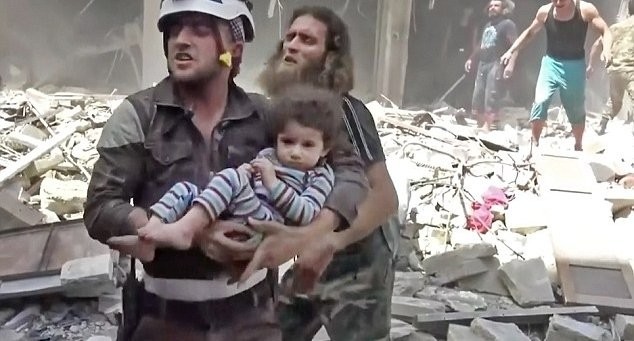 Where is YOUR White Helmet?

Henry Dunant kneels in a field in Solferino. Overcome with emotion, he has witnessed for the first time in his life the horrific, stark reality of newly-modernized, industrial warfare, coming of age in 1859.

Thousands of bodies lay piled haphazardly on top of each other, many still alive, suffering not only from their festering wounds but also an even more cruel thirst as there is no water or care for any of them. The dead and wounded are looted… giving up their boots, their coats and treasured mementos from home. Even the horses suffer without water and many are euthanized. The field is an expression of hell on earth…wails of suffering, the stench of death, the worst side of humanity.

Dunant was so moved that when he returned to his home in Switzerland, he gathered together a group of friends and conceptualized a network of private relief societies, dedicated to the proposition of serving the needs of the victims of war. This small group of five friends, grew to a movement that would include the International Committee of the Red Cross and the International Committee of the Red Cross and Red Crescent. Within a few more years his group would convene the Geneva Conventions, the first legal instrument of international humanitarian law.

It’s also important to note that, perhaps unknowingly, Dunant also witnessed a major sociopolitical transition – in that Solferino was the last major battle fought on both sides by armies directed by monarchs. The concept of the state and its associated government was changing. And these changes were reflected in the blind ferocity and inhumane prejudice of despots clinging to power at any cost. And yet the true cost, the real burden of loss was born by humanity.

Years later, an American nurse named Clara Barton worked frantically to save the life of a soldier severely wounded during the United States Civil War. As she turned, a bullet would graze through her blouse, then exiting to mortally wound her patient. Barton came to recognize the face of industrialized warfare as battles like Gettysburg would come to take the lives of over 50,000 men in one single confrontation.

After the war, Barton established an organization that would seek to further mitigate the atrocities that had occurred. They assisted linking soldiers with their families. They intervened to provide medical care and proper burial for the prisoners of war held under atrocious conditions in the prison camp of Andersonville.

During a visit to Switzerland, she became aware of the work of the International Committee of the Red Cross and then returned to the United States to found the American Red Cross. This organization would provide humanitarian aid during the Spanish-American war and then extend its work to also include national disasters like the Johnstown flood and Galveston hurricane. 67,000 disasters later, the organization has grown to over 500,000 volunteers working in 650 chapters throughout the country.

And though the concept of the state had changed from monarchy to democracy, the obvious challenge to humanity remained. The state’s role in governance of the people had changed hands. But the capability of the state to impart large-scale destruction and suffering had also grown exponentially – even in the hands of a democratic populace.

A state controlled by humanity, appeared quite willing to attack humanity on a massive scale. But, one thing had not changed. Civilians and their associated support systems were not intentionally included in the battles. For centuries battles were waged among only combatants. And even at this most horrific of scenes in Gettysburg, civilians were spared. There are even stories of civilian population gathered on hillsides watching battles below.

Khalad Omar reaches into the boulders that had been his mother’s home to retrieve a 10-day-old baby still alive after hours beneath the rubble that was once the city of Aleppo. Rivulets of sweat trace lines down his face now covered in an acrid dust. Omar wears a white helmet, indicative of his membership in an organization of the same name. When the explosions occur, these White Helmets run to the destruction, instead of away from it. Their credo comes from the Koran, “whoever saves one life saves all of humanity”. Omar is barely able to carry the child to an awaiting ambulance. Once inside, he is overcome with grief, loss, exhaustion and horror.

The White Helmets are ordinary Syrians, a private society of heroes that have stepped forward out of the tragedy of a war that has already killed over 400,000 people. This “humanitarian experiment in self-organization” began with the same noble intent to save lives and lessen the suffering of those impacted by war.

This grassroots-level organizational model has become even more necessary in the modern age of the “super state”. And perhaps the most tragic transition is that morbid expansion of state-led violence to now target civilians – humanity itself. The anti-thesis of humanity, states now attempt to force civilian populations to capitulate and undermine support for combatants.

Hospitals have become a frequent target on both sides of the conflict and are now bombed several times a day. And even the White Helmets themselves have become targets using a new method of “two-tap strikes”, where planes dropped the first set of bombs before circling back to make another run at the medical responders themselves. During cease-fires, air attacks now destroy convoys of humanitarian aid that would’ve delivered food and health supplies for thousands of civilians.

Water, power, food, healthcare, electricity are all gone. And sadly, now so is Khalad Omar. He was killed in a mortar attack a year later.

Like Dunant, Omar had also unknowingly witnessed a sociopolitical transition. These are times when people question whether states will be controlled by humanity or humanity is controlled by the state. And within this quandary comes the secondary realization that with the ever-expanding power of the modern technological state and its ability for nuclear annihilation, it is now become possible for “Whoever ends one life, to also end all of humanity.”

And so now, I must ask you, “How have we driven so far away from the nobility, humanity and courage of international humanitarian law”? The Geneva conventions remain binding as international law that have force of custom and involve the entire international community.

These conventions establish rights and privileges for medical personnel. They call for persons who do not take direct part in hostilities to be treated humanely. Reprisals against protected persons and objects are prohibited and the will of the wounded and sick must be respected. In addition to rights of protection, medical personnel also have duties to provide their services respecting the principles of medical ethics and to remain neutral throughout the conflict.

However, there is a passage of the Geneva Convention (5.1) which is no longer applicable in many cases. The Geneva Convention states that “medical personnel can either be military or civilian but civilian personnel are not covered by such international humanitarian law unless they have received an assignment from the party to the conflict to which they belong.”

In this sense, the convention did not protect Omar. Nor did we. Why must we as humanitarians be a party of the conflict in order to save the victims? The edict is antiquated and lacking relevance in an age of asymmetrical and hybrid warfare.

One need only review a small portion of the history of humanitarian service in the world to realize that nearly every institutionalized effort of humanitarian assistance began as a self-organized instrument of the people themselves…humans serving the needs of humanity when the state has failed to do so. And yet now in this age of an overwhelming number of humanitarian organizations throughout the world, we have somehow become removed from (or perhaps even ignored) the tragedy of attacks against the profession of disaster medicine itself.

We as disaster medicine practitioners, in many cases leave our homes, travel to the affected areas provide aid and then return to comfortable lives. One must wonder if this ability to remove oneself from the suffering also allows us to turn our heads and ignore international humanitarian law, even when it threatens the very existence of our profession itself.

And so I’m calling upon you now my brothers and sisters, disaster responders from around the world to take a stand. The time has come for us to join the 3,000 bakers and tailors, pharmacists and carpenters that have saved over 60,000 lives in Aleppo. We, as the international community of disaster professionals have a responsibility to “save one life” (in Aleppo) but also to “save all of humanity” (in Geneva).

Where is your white helmet?